Artists Among Us: Paton Miller 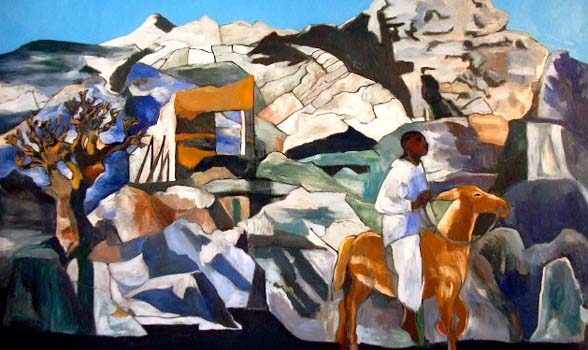 Continuing with our artist profiles of artists both living and working in the Hamptons, our next artist is Paton Miller, who lives in Southampton.

Southampton - Artist Paton Miller was born in Seattle and raised in Hawaii. His father was a pilot, and his mother was a chemist. His only sibling, an older brother, passed away last year, and Miller fondly recalled "He was the brains in the family. I was artistic but he could build anything - when he needed a barn for his horses he just built it. If something was wrong with the car he'd just take the engine out and fix it."

Miller attended the Honolulu Academy of Art, and after an extensive time traveling the world, he found his way to Southampton in his early 20s, and received his B.F.A. at Southampton College. He and his wife have lived in Southampton for many years, and have two sons, Sam, 18, and Christian, 10. Miller's claims his response to 'how are you?' is always "I have two great kids who are healthy, and a wife who still loves me!" He and his family have spent a number of summers in Bali, and have a farm in the Costa Rican countryside.

Miller's work is in the collections of the American Embassy in Abu Dhabi; the American Embassy in Bogota, Colombia; Heckscher Museum in Huntington, NY; Guild Hall in East Hampton; NY; The Parrish Art Museum in Southampton, NY; and William and Mary College in Virginia. He is represented on the East End by The Pamela Williams Gallery in East Hampton.

When did you start making art and what medium(s) do you consider to be your roots in art?

Paton Miller: I started when I was pretty young. I was sort of known as the artist in the family. My father was a pilot and my mother was a scientist - a chemist - and her whole family were scientists, so I was the guy who was always drawing, and I lampooned the family with caricatures, and that was the beginning. I was very influenced by cartoons. I grew with the Warner Bros. cartoons, and Bugs Bunny, and became interested in their earlier cartoons like Krazy Kat. When I was a kid The Katzenjammer Kids was popular, so I was always interested in cartoonists, although I never did that in a professional capacity, it's not surprising that later on I became really interested in Daumier, Goya, and Hobart.

What is it about the Hamptons that brought you here and enticed you to stay, work, and pursue your art here as opposed to some place else?

PM: Well, I never knew or heard of The Hamptons. I was raised in Hawaii, and while living with my parents I was planning a trip that was going to take me from Hawaii and travel west through Asia and Europe. This was to be an around the world trip, and a family friend who was staying with my parents, Ellen Offutt, looked at my itinerary and she saw at one point that I'd be landing at JFK. She said 'When you land in JFK come out to my house' in this place called Southampton. I'd never heard of it - I'd heard of Long Island, and I thought it was about 25 or 30 miles long! In any event, I did finally end up at JFK and in New York for the first time, so in the Fall of 1974, I'm at JFK and had to make a decision whether or not I would come out here or just head back to Hawaii. I was 21, and as I mentioned, my father was a pilot so I had passes which I had to use before my next birthday. I remember talking to a few pilots and I was surprised to learn that Southampton was so far away - over two hours from the City - but I decided to come out and see Ellen anyway.